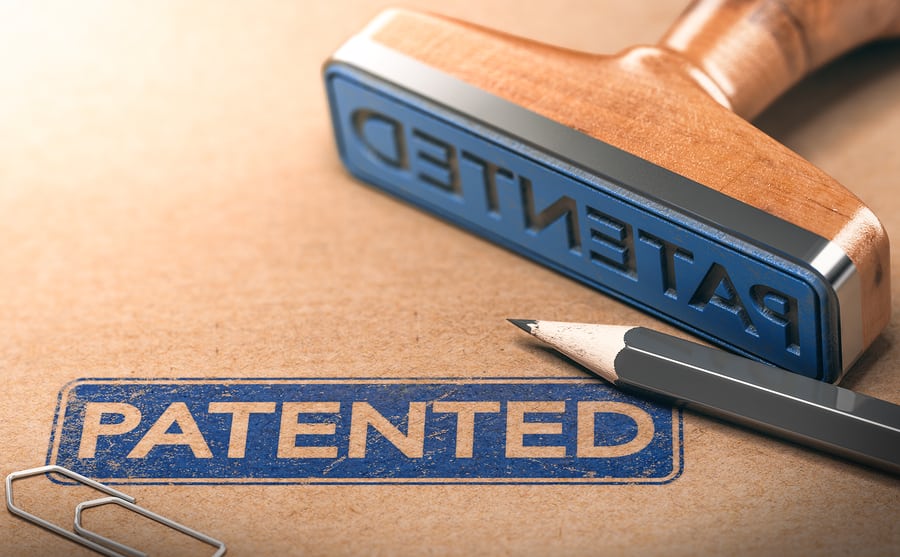 Not All Software Can Be Patented

Patent law is quite complex, which makes sense – not everything can (or should) be patentable – especially when considering computer software. A specific section of the patent code, Section 101 of Title 35, states:

Whoever invents or discovers any new and useful process, machine, manufacture, or composition of matter, or any new and useful improvement thereof, may obtain a patent therefor, subject to the conditions and requirements of this title.

There are some exceptions to Section 101, which cannot be patented – laws of nature, natural phenomena, and abstract ideas – as they “are the basic tools of scientific and technological work….”

It’s the ‘abstract ideas’ bit that has proven so problematic in court in regard to software patents, as it is quite vague. Everything came to a head, though, with the Supreme Court’s 2014 ruling in the case of Alice Corp vs. CLS Bank. This was a case examining software ideas and the difference in software being only ideas or actually making something new. We don’t need to go into tons of details here, but the Court’s final decision made it more difficult to obtain software patents. Because the patent creating ‘something new’ had to be proven, gone were the days of saying, “I’d like to patent X concept – we’ll do it somehow with computers.” 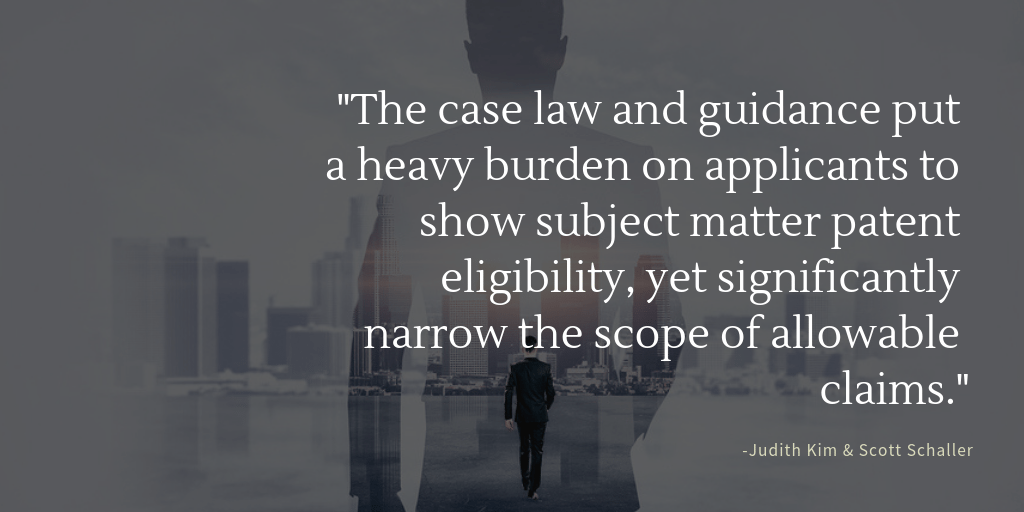 This decision has also rippled through patent history. Hundreds of Pre-Alice patents were revoked or instantly had targets on their backs. Alice also altered the current-at-the-time test used by the United States Patent and Trademark Office (USPTO) to see if proposed software was, in fact, patentable. But, perhaps the most important ripple caused by Alice has been the increase in software patents rejected since the ruling. Pre-Alice software patent rejections totaled 7% of all patent rejections. But less than one year after Alice, the percentage of rejected software patent applications was 15% of all patent rejections. We’ll repeat that: in less than one year after Alice, the total percentage of software patent applications had more than doubled. Software developers suddenly had a lot more to prove. 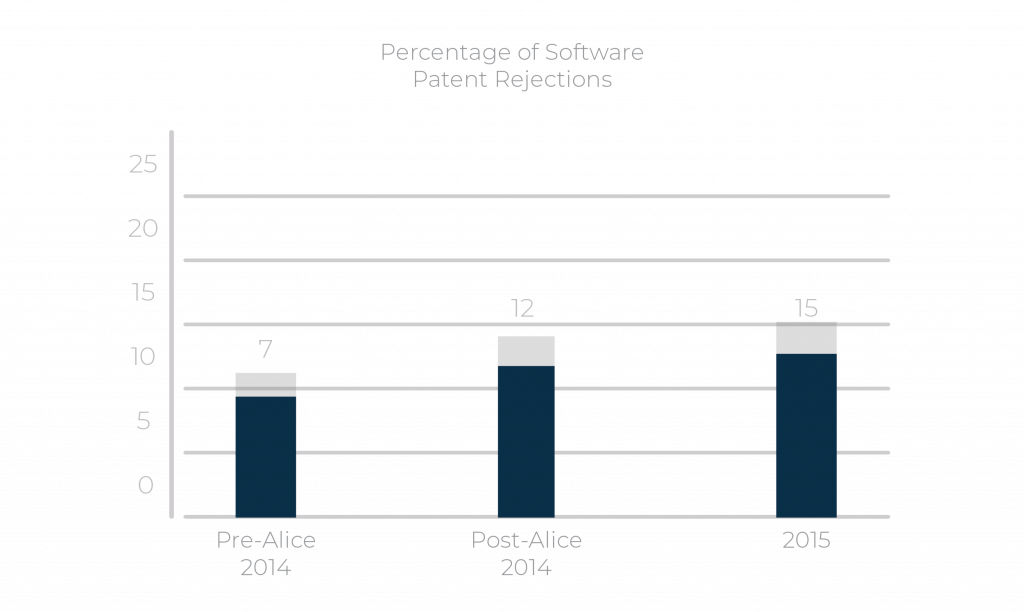 Fognigma enterprise software builds traceless, encrypted networks in which organizations can protect their communications and collaboration. These networks are built out of randomly leased virtual machines from multiple cloud providers. Though all over the world, these virtual machines function as one network. Inside this invisible and secure network are components such as fileshare, telephony, video conferencing, chat messaging, and more – each one also encrypted and secure. And if you need it to, Fognigma can surround your current network with a shell of obfuscation and additional encryption.

Fognigma is unlike anything else out there. How can we claim that? Easy – Fognigma has been awarded two patents for its technology. Two patents… so far (we have an additional one that has been Allowed, and several more pending).

Two patents in 2018, mind you, after the Alice decision. In a time when software patents have many more hurdles to leap and a two-part test to pass, Fognigma has proven (and is still proving) itself more than just an abstract idea. It’s been recognized by the USPTO as a product which is actually adding something new to the world – multiple things, in fact, based on our multiple patents. We are very proud of Fognigma’s current patents, but we’re not stopping there!

Notice we said there are more patents pending for Fognigma. This is because the innovation never stops. The PwC 2017 Global Innovation 1000 Study analyzes the biggest companies in the world and compares their revenue to their spend in research and development. Some companies make a lot of money off their products without investing much back into the improvement and continued innovation of those products. Not the case with Fognigma. 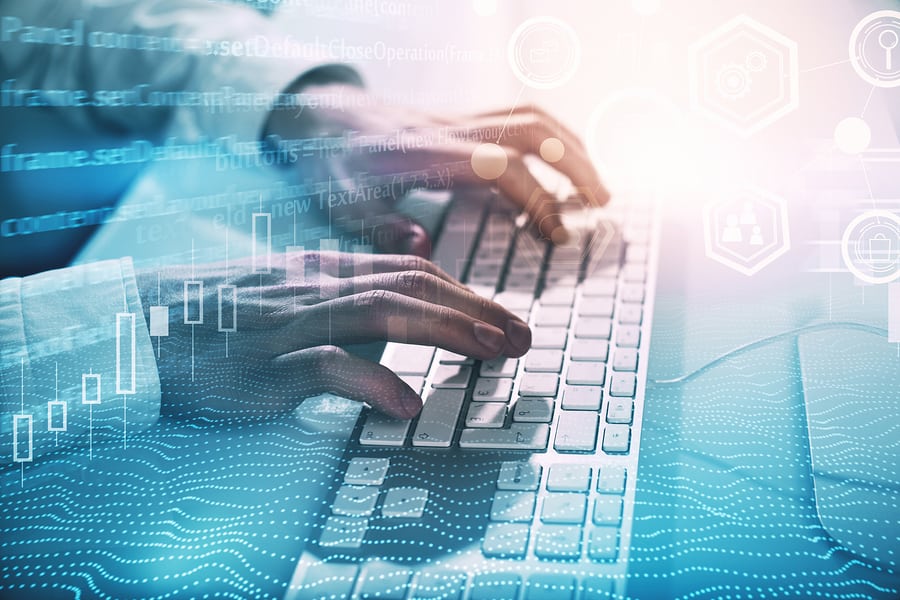 When looking at only the software industry on that report, the top ten highest revenue companies spent an average of 11.5% of their revenue on R&D. At almost three times that percentage (34% to be exact), Dexter Edward makes sure enough is reinvested to ensure Fognigma continues to improve and innovate. When just examining the revenue to R&D ratio, Dexter Edward is in the top ten of US-based software companies and top twenty of global software companies. With Fognigma, innovation never ceases.

And this is majorly important in the realm in which Fognigma operates. The threat landscape against communications and collaboration is evolving as fast as it can. Every day, cyber threats are creating new avenues to exploit, new tools to abuse, and new targets to attack. It is a necessity, then, that Fognigma continues to evolve to evade threats and allow organizations to disappear from the visible Internet. And because the operations and missions of these organizations are of the utmost importance, Fognigma continues to innovate, giving organizations new components and stronger superpowers.

Protect your networks, files, users, missions, and communications with the patented, proven Fognigma enterprise software. Fognigma is definitely bringing something new to the world of secure comms and collaboration.

BONUS POINTS: Watch this video for the Alice Corp vs. CLS Bank case (as acted out by dogs).